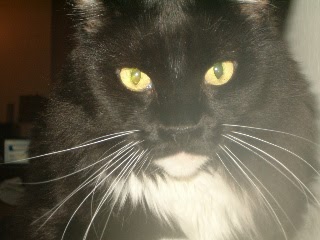 Isn't he beautiful?  He wasn't always .. when I first saw him he was a scared short-haired little tuxedo kitten, so weak and pitiful; fleas were all over him and he walked/crawled with a limp.  And he was very, very quiet.  Unusual for a stray kitten in unknown territory surrounded by giant two-legged ones.  But there he was in my co-workers cat carrier on his way to the pound.  The pound.  So tiny and helpless.  She'd found him that morning in the trash dumpster at her apartment complex.  She already had a big bully cat and couldn't take in another animal; hence the pound.  I wasn't supposed to have any more cats, I was already owned by 2 .. but there he was ... looking at me through the bars of the case.  Calm, quiet and ... I don't know .. but the next thing I knew I had convinced her to not take him in just yet.  I wanted to run him by my vets office to find out what was wrong with his leg .. I wanted to give him a chance.  It was my half-day at work so soon we were on our way.  From the carrier, now strapped into the front seat of my car, he was still quiet ... laying in the back, sleeping. 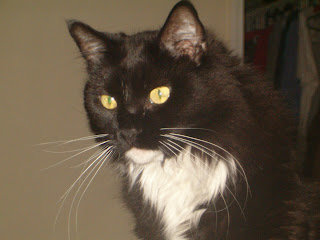 The vet said that his little back leg wasn't broken, but that someone had either kicked or hit him so hard that it was permanently damaged.  And he was around 7 weeks old .. just a baby.  The doctor sprayed him with flea stuff and you could just see them hopping off of this poor baby; they were killing him.  Then Dr. Prewitt pointed something else out ... some of the kittens whiskers were very short, others curling.  Huh?  Wait .. let me rephrase that .. some of his whiskers were cut off and others had been burned.  Beyond kicking/hitting this helpless little baby, someone had burned off some of his whiskers!  The pound?  It was the vet's opinion that they wouldn't do much with an un-adoptable handicapped kitten and would probably put this baby to sleep.  I had a very easy decision to make. 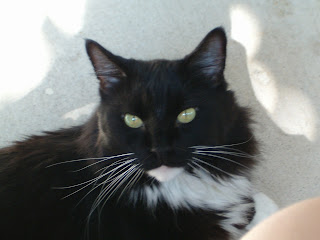 So I took him home ... and I had my lap kitty.  Ever since the death of my Alexandria, I had wanted another lap kitty.  Neither my then present cats Siobhan or Cassidy were lap kitties; they were lay-next-to-you-a-bit kitties.  But this one curled up on my lap and slept and slept and .... yeah, you get the point.  After his bath of course.  And some food.  But he was still so very quiet, not even much of a purr.  The next morning, however, was something else entirely .. suddenly I had a somewhat active kitten.  He was awake, rested and feeling much better.  And you know what?  He gave a little raspy meow.  Then it hit me .. he had been in that trash dumpster long enough to scream himself hoarse. I didn't have a quiet kitten, I had one with laryngitis.  Lap kitty?  Oh hell no ... he was all kitten, scrambling up and down everything by the end of the day, bad leg not keeping him still one bit.  Jumping .. leaping .. e.v.e.r.y.w.h.e.r.e .... BonBon hated him, Cassidy tolerated his presence and life went on .... 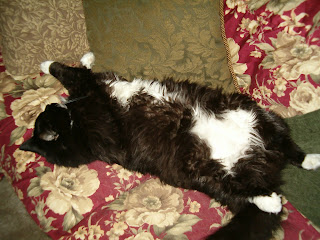 That short-haired kitten?  Oh no, not now, not long after another month in my home.  It sprung.  Fluff everywhere and oh my is it soft, silky.  Turns out he's got a bit of Maine Coon in him.  Did you know that their fur tolerates the cold/wet weather of New England because moisture slides down it .. doesn't get wet easily, therefore it cuts down on their freezing.  See?  I can teach you stuff on this blog.  Anyway, I shudder now thinking about what would have happened to him had Carol not found him .. you see, he was about 1 hour from being picked up by the garbage truck.  But because she did and because I was willing to take him in, this 11 year old fur-baby is alive and healthy today.

Senior cats are interesting.  Aidan is the oldest cat I have ever had.  Watching the changes in him, the slowing down of his routine, has been a delight ... most of the time.  We've had some scares .. his inability to groom himself as well anymore has led to big hairball issues for one thing .. but we are both learning what old age is for cats every single day of our lives together.  I'm helping him and he's helping me.  But you can help another senior kitty .. her name is Miss Mousie and she is the foster cat of Harlequin Romance author Melissa McClone.  Miss Mousie really needs TECA (Total Ear Canal Ablation) surgery and costs are up there ... $5,000.  Melissa has put up a chip-in with funds going directly to West Columbia Gorge Humane Society for the operation costs.  Oh, and Miss Mousie has a FB page and a blog.  The blog is full of writers and their cats ... blog posts from the likes of Kay Hooper, Lorna Barrett and Sue-Ellen Welfonder.  Great stories, great posts.  If you are a published writer and you wish to help, contact Melissa and let her know.  And if you aren't and want to help anyway .. just sneak in posts on your own blogs and spread the word .... 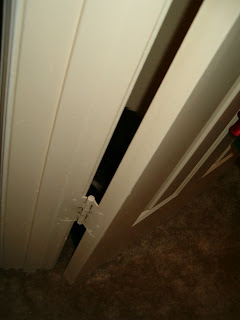