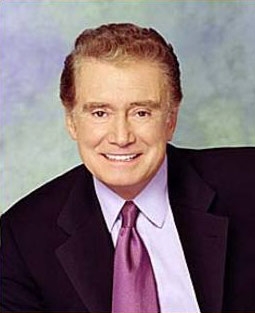 Regis who?  My response for a while, since I only really noticed him on the odd days that mom was home from work.  It wasn’t until mom retired that I really started watching the show with her, and then still periodically (confession, I couldn’t stand Kathy Lee).  When I started taking care of mom it became a morning staple.  Besides, Kelly Ripa had joined by then and I found myself really enjoying the show.  So a morning routine was established.  Mom would get up, I’d make breakfast, we’d sit at the table until time for Regis and Kelly then move on into the den.  They became a part of our lives.  In fact, that’s how we found out about Sept. 11 … I had turned on the TV for the show and well, we know what. But anyway, back to Regis, because it really is all about Regis.  Mom had a bit of a crush on him, and as her dementia deepened he remained a steady part of our lives.  People’s names might disappear from her mind, but never Regis.

I’d get mom up in the morning, help her get dressed.

“Regis and Joy” (his wife for those that don’t know).

“Yes” a giggle and a secret smile.

I’d say something like “why didn’t he mow the lawn while he was here?”

Yes, Regis and Joy made many night time visits to my mom’s room … and she was ecstatic about it, until the sister-in-law stepped in.  Yeah, my sister-law Bev helped to take care of mom.  At some point mom started calling her “riffraff” and acted kinda cold towards her.

Mom would look at me and say “You know”.

“She’s trying to take away my boyfriend.”

So you see, saying goodbye to Regis is almost like saying goodbye to mom again.  I’ll be right in front of the TV, and I’ll probably cry a little.  No, I’ll probably cry a lot … so long Regis Philbin, I wish you the best at whatever you go on to do.  And I know that a lady up in Heaven will be watching you too.
Posted by Bailey Stewart at 8:07 PM 6 comments: Links to this post